Today we published 2 papers in Nature. 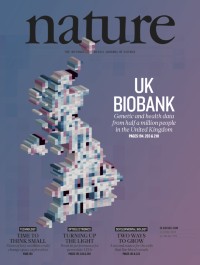 The first describes our work on the centralized analysis of the genetic data on all 500,000 UK Biobank participants

Here is some press that the papers received

The UK Biobank Genetics paper is now on bioRxiv

New version of BGENIE v1.1 released. This version improves some of the computational aspects involving threading

Giving a talk today at the UK Biobank Annual Meeting

Giving a keynote talk today at the MLCB workshop at NIPS in Barcelona. My talk is on “Sparse Bayesian Modelling for Multitrait Genetic Association Studies” and will describe research carried out by Kevin Sharp (postdoc in my group) and Valentina Iotchkova (ex-DPhil student in my group).

Welcome to Zhangyi (Jeffrey) He, Matt Kerin, Simone Rubinacci, Daniel Wells and Chris Gill, who have all started in the group.

The Haplotype Reference Consortium paper is now out! Major contributions from Warren Kretzschmar who worked on this project

New paper out from Victoria Hore in our group

We have two postdoc positions advertised right now. Get in touch if you want to know more

Presentation at The Broad Institute in Boston in their Molecular and Population Genetics seminar series, entitled “Modelling multiple phenotypes : better together”

Giving a talk today at the UK Biobank Annual meeting.

Recent interview I did about our Wellcome Trust Collaborative Award.

Congratulations to Warren Kretzschmar who passed his DPhil Viva today! His thesis title was “Methods for phasing and imputation of very low coverage sequencing data” and was examined by Simon Myers and Heather Cordell.

We have 3 new postdoc positions available to work on methods development for the 100,000 Genomes Project. These posts are funded by a Wellcome Trust Collaborative Award, and will be supervised jointly by Prof Jonathan Marchini, Prof Simon Myers and Dr Garrett Hellenthal (UCL). There are 2 positions in Statistical Genetics Methods Development and 1 post in Statistical Genetics Software Development.

Wellcome to Simone Rubinacci (SysBio DTC) and Daniel Wells (GMS) who have joined the group to do rotation projects.

Congratulations to Victoria Hore who passed her DPhil Viva today! Her thesis title was “Latent variable models for analysing multidimensional genetic data sets” and was examined by Simon Myers and Oliver Stegle.

We are pleased to announce that the 2nd Probabilistic Modelling in Genomics conference (ProbGen16) will be held at the Department of Statistics in Oxford from 12-14 September 2016. Accommodation will be at Somerville College. We hope this will be an exciting meeting, showcasing much cutting-edge work in the area of Statistical Genomics.

We have been awarded a Wellcome Trust Collaborative grant to work on the 100,000 Genomes Project. This work will be jointly supervised with Prof Simon Myers (Oxford) and Dr Garrett Hellenthal (UCL). More details to follow in due course.

The method is implemented in an R package called PHENIX

Congratulations to Warren Kretzschmar who has just submitted his DPhil thesis!!!

Matt Kerin and Richard Brown have joined the group for their GMS rotation projects.

Congratulations to Victoria Hore who has just submitted her DPhil thesis!!!

We have successfully completed the phasing and imputation of the first ~150,000 samples of the UK Biobank Project. This will be a tremendous resource for the human genetics community over the next decade. We have written a document which details the statistical analysis involved.

Our group played a central role in the analysis for this project. We designed and implemented the genotype calling and phasing pipeline, which used SHAPEIT2 and MVNcall. Olivier Delaneau, Androniki Menelaou and Warren Kretzschmar all contributed to this work.

The CONVERGE paper is now out in Nature. This study used low-coverage sequencing of 12,000 Chinese women to uncover new risk genes for Major Depression

The first release of the Haplotype Reference Consortium dataset can now be accessed via imputation servers.

We have done very well this year at the American Society of Human Genetics meeting in San Diego, with 3 members of the group being selected to give a talk about their research. Here are the details

The University of Oxford has made Jonathan Marchini a Professor of Statistical Genomics.

We have released a new version of SHAPEIT2 that implements this functionality.

We have also released a new version of IMPUTE2 that fixes a bug in the panel merging functionality, and provided a minor update our phased version of the 1000 Genomes Phase 1 dataset.

The method is implemented within SHAPEIT2 and also in a standalone package called duoHMM.

We have just released a new version of SHAPEIT2 (v2 r767) that implements functionality for (a) using phase information in sequencing reads to help phasing, and (b)phasing in general pedigrees. This work is associated with the following two publications

#### 18 Oct 2013 We have done very well this year at the American Society of Human Genetics meeting in Boston, with 4 members of the group being selected to give a talk about their research. Here are the details

We have just released a new version of the Phase 1 haplotypes from the 1000 Genomes Project. Using a set of validation genotypes at SNP and biallelic indels we have been able to show that these haplotypes have lower genotype discordance and improved imputation performance into downstream GWAS samples, especially at low frequency. The haplotypes are available from the 1000GP website or the IMPUTE2 website.

This paper presents a significantly new algorithm for haplotype estimation that combines together the best ideas from IMPUTE2 and SHAPEIT1. The new method clearly outperforms other existing methods in terms of phasing performance and is very competitive computationally.

We have just released a new version of MULTIMIX (v1.1.0). This new version allows for missing data.

We have just released a new versions of SHAPEIT (v2). The paper on this new version has now been accepted in Nature Methods and will appear soon.

Olivier Delaneau has won a Charles Epstein Post-Doctoral Award (worth $2,000) at the ASHG conference in San Francisco for his work on SHAPEIT2. Well done Olivier! Androniki Menelaou made the final of the Pre-Doctoral competition (worth $1,000) but did not win a prize.

Claire Churchhouse’s paper has been published in Genetic Epidemiology

In this paper we develop a method for carrying out admixture deconvolution with more than two source ancestral populations. The method can handle both phased or unphased data from the source and/or sample populations. The method was used to analyze data from Phase 1 of the 1000 Genomes Project which was recently published in Nature. The MULTIMIX software implementing this approach will appear here soon.

Jonathan Marchini has been awarded a Philip Leverhulme Prize

The latest 1000 Genomes Project paper has been published in Nature today.

This is a big international collaboration that has sort to sequence a large number of individuals from around the world with the aim of mapping the majority of the genetic variation with frequency above 1%. Members of our group that contributed to the analysis were Olivier Delaneau, Claire Churchhouse, Jason Liu and myself. The project has been reported in the mainstream press.

The company Affymetrix has launched a new genotyping chip that was designed using our software IMPUTE2. They have issued a press release giving the details

Androniki Menelaou’s paper has been published in Bioinformatics

In this paper we show that combining low-coverage sequence data with microarray genotyping on the same subjects can lead to high quality haplotype reference sets that produce a notable boost in downstream imputation accuracy. The MVNcall software implementing this approach will appear here soon.

We have done very well this year with accepted talks at the American Society of Human Genetics meeting. Olivier Delaneau and Androniki Menelaou have made the final of the post-doctoral and pre-doctoral Charles J. Epstein Trainee Awards

Claire Churchouse has succesfully passed her viva. Her thesis entitled ‘Bayesian Methods for Estimating Human Ancestry Using Whole Genome SNP Data’ was examined be Dr Lachlan Coin and Dr Simon Myers. Claire is now off to start a postdoc with David Althuler at the Broad Institute of Harvard and MIT. Good luck Claire!

Victoria Hore has joined the group for her DTC project. Welcome Vicky!

Warren Kretzschmar has joined the group for his rotation project. Welcome Winni!

From here you can search these documents. Enter your search terms below.